Today was the pick of the week

I couldn't help it.  With the weather forecast showing today as the "pick of the week", I decided a day fishing would be better than a day at the office!  Sunny sky, low humidity, low 80s.

I had the place to myself.  I hadn't fished there since last year.  The water is soooo low this year.   Wading was easy, but the fish weren't in the same spots as last year, and it took a while to catch on.  It was a challenge, but my guess is that I caught smallies (i.e. small smallies) at the rate of a dozen an hour during my three hour visit.

Though the river was low, it was flowing fast.  I fished a conehead combo (the conehead is barely visible in the picture because the gold conehead is behind the hackle, not in front of it).  The technique was to swing it downstream and back-and-forth through the current. 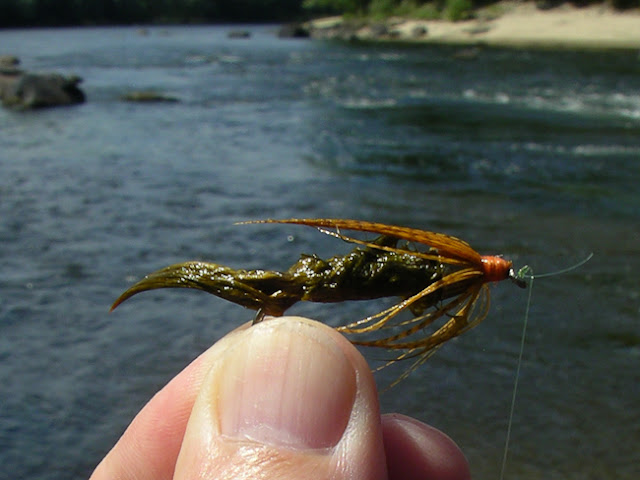 Too, I had a bit of a casting problem.  I used the 9' 5W that I use 99% of the time for river and pond fishing, but all I had with me was a 4W line.  I need to be more careful, as I use the same Ross reel (I have two of the Cimarron 2's) for 4, 5, and 6W lines and all my floating lines are Cortland 444 in peach.  It makes it easy to use the wrong weight.  Then, add a bit of wind, and at least initially I had a difficult time.  But it is amazing how you can adjust your casting tempo and speed to accommodate the lighter line, even with a fly on the end that would be best casted with a 5W or even 6W.

The fish were small but feisty and acrobatic.  Very much what you'd expect from river-bread smallmouth bass.

[Edit: Thanks goes to my friend Carl who pointed out just minutes after I pushed the publish button on this post that "river-bred" might be more what I was looking for *lots of laughter*]

Almost all were the same (i.e. small) size as the one shown below.  I did catch one about 10", and the biggest of all (I think) broke me off (2x tippet) when I set the hook. 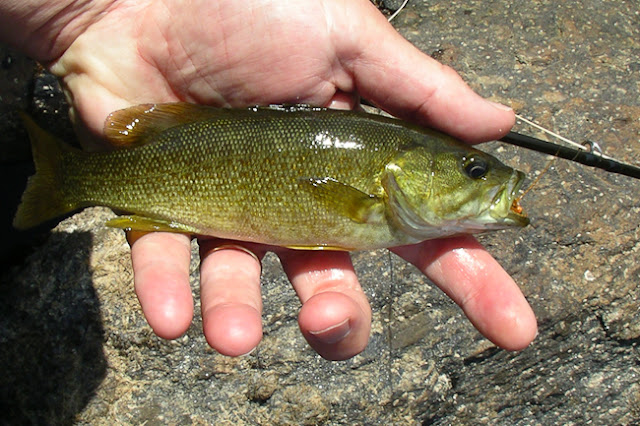 Below are a couple of pictures of the area.  The Merrimack is a wide river and rough, dark, and dangerous during much of the year.  But in the summer the water gets clear and low.  Smallmouth bass are by far the predominant species. 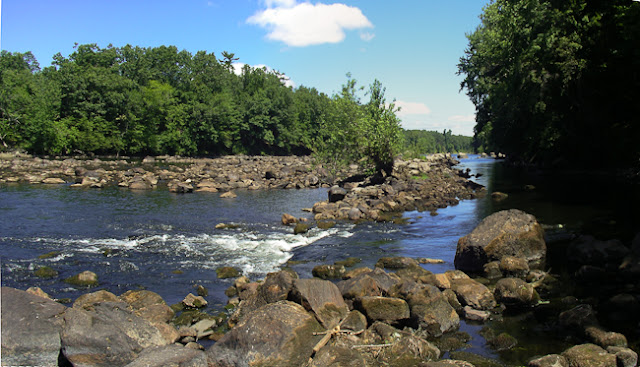 This caterpillar was a nice find.  It was just climbing around the rocks, probably looking for some vegetation.  It's length was 3"!  With a little research I found out that this is an Acronicta Americana. I am disappointed that it merely turns into a brown moth. I was hoping for a big beautiful rare butterfly.  On the other hand, my best guess is that by now it has become bird food.  A yellow body against dark rocks doesn't exactly provide much camouflage. 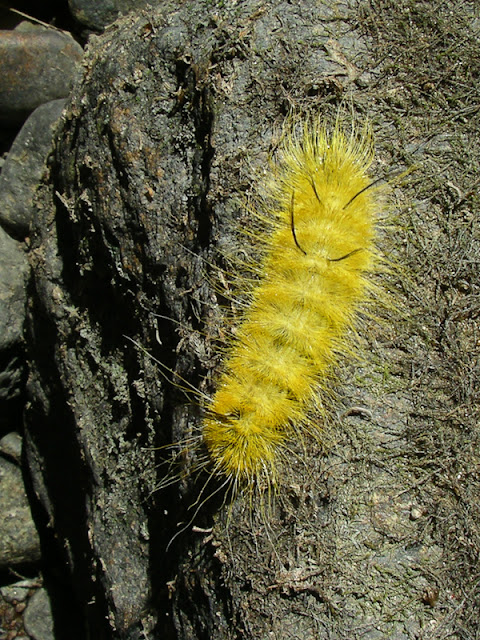 Somewhere on the Merrimack..Well nice for you anyway...