Flies used fishing for trout on the Connecticut River 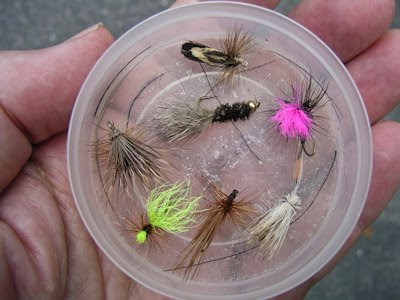 This picture is a follow-up to my previous post, about fishing for trout in northern New Hampshire along the Connecticut and Androscoggin Rivers. I hope to be adding individual close-up pictures of each of these flies to the Web site. But, in the meantime:

In the fly box on the left, at the 9:00 position: Deer Hair Caddis tied by Paul to match the alderfly. (see my earlier post for a picture of the alderfly.)

10:30 position: Hare and Herl Bugger tied by me. I tied this also with a lead wire underbody and with hen hackle wrapped over the entire body, to make a Hare and Herl Woolly Bugger. But the bead head version shown here was the only nymph I needed for this trip, which I fished unabashedly under a medium sized fluorescent red indicator.

2:00: My favorite dry fly, a very visible Parachute Coachman. A size 14 is all I frequently need.

5:00: Paul gave me a few of his Elk Hair Caddis with light colored (or bleached) wing for easy visibility. On this trip, I fished this almost as much as the Parachute Coachman. I plan to tie some of my own as this was a very productive fly for me

6:00: Jon's favorite Alderfly imitation, tied with brown hackle wing and collar. I had a hard time seeing this on the Androscoggin where I first fished it, as it seems to match the tanic tinted color of the river. But Jon has far younger eyes than I do, and he scored big time with this fly during our first day's outing.

7:00 position: My Parachute Trude has a crinkly calf tail wing. Sometimes I tie-in a tail made from the hackle fibers of a pheasant's tippet feather (same as on the Parachute Coachman), though it appears that in this sample I either chose not to or simply forgot about it. The butt ends of the chartuese wing are tied so as to create the parachute post. Very economical and efficient! I find that chartreuse is a good color for early evening fishing. I have always thought that with a cream colored dubbed body and tan calf tail wing that this pattern could suitably imitate a small woodland grasshopper, as they are often tan or grey with a cream colored tummy.
Posted by Peter F. at 7:00 AM