I am happy with yesterday's pictures... trout, flies and bears

I am getting very much behind on some of the stuff I want to post here on the blog, including pictures of a marathon trout fishing day last month and several fly photos.  I also have some equipment I have been happily using for ten or more years, that I want to comment about.

Even with this backlog of ideas,  I nevertheless decided this morning to post photos from yesterday.... mostly because I want my fishing buddy Paul to be able to show the bear pictures to his young granddaughters this morning.

Through my bleary eyes (it was near midnight when I got back from the day trip) I think the pictures came out as well as can be expected (the bear pictures, that is) because I really did not want to get any closer.  In fact it was very comforting to have a few human bodies between me and the bear.

There is a Part II to the story.  About an hour later and a couple of miles from the original bear siting, the same bear walked across the stream about 100 feet from where we were fishing.  It was a little after 8pm.  We fish here often.  It is my guess that the same or different bears pass through all the time... and we just don't seem them.

We traditionally start our fishing with a restaurant breakfast (with all the stuff we shouldn't be eating!) and a stop at North Country Angler to talk about water and fishing conditions.  NCA is in North Conway, New Hampshire 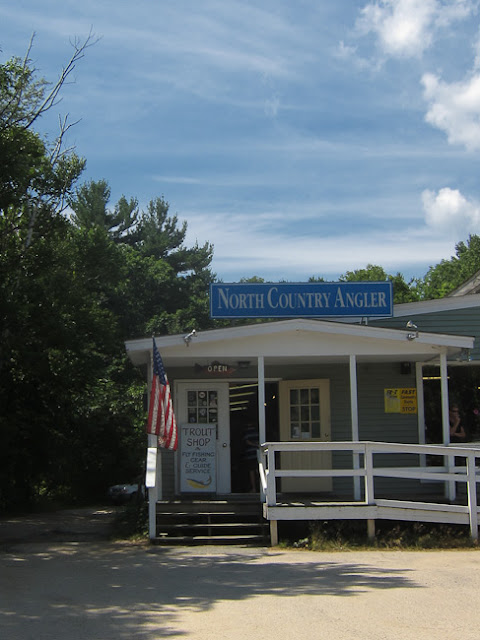 We thought for sure these cumulus clouds would develop into rain clouds.  Fortunately we had no rain until 8:30 pm on the drive home.  These next three images are of remote areas of the Ellis River.﻿ 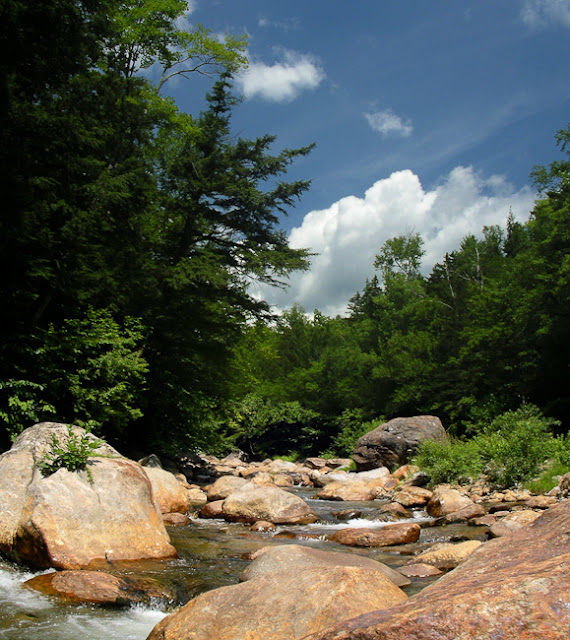 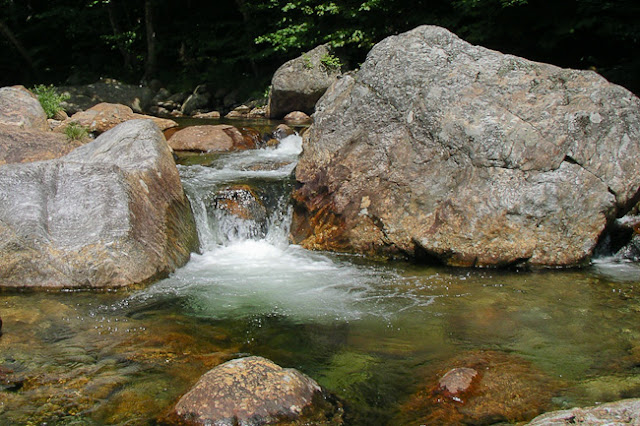 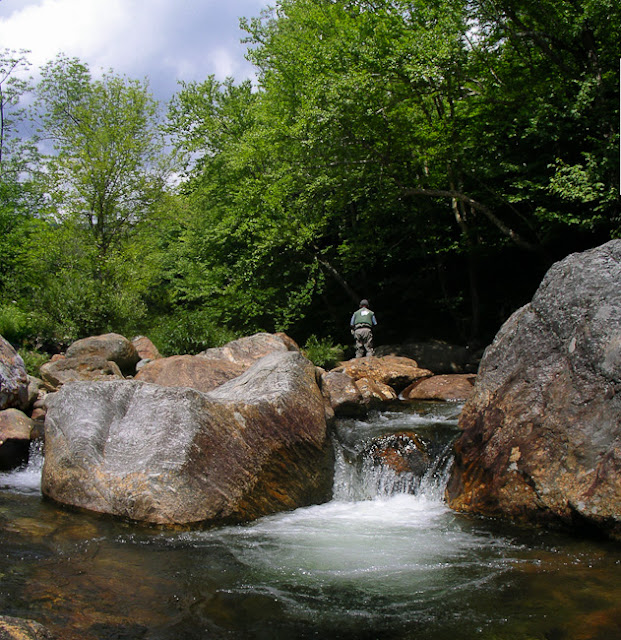 We didn't see many bugs in the air, but obviously they are around.  This is a stonefly shuck on a rock at the edge of the stream. 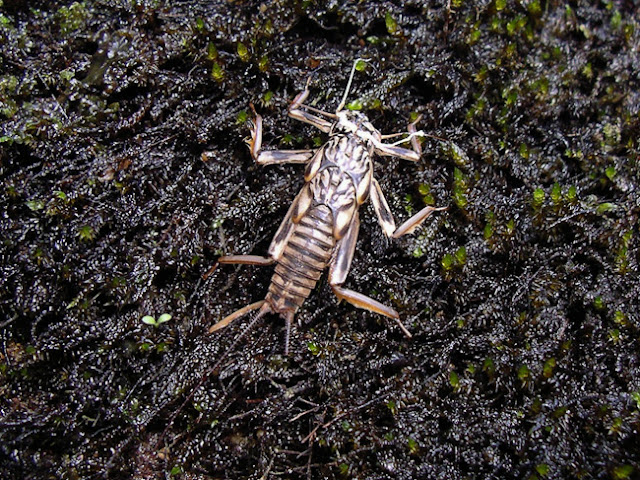 ﻿Typical native brook trout.  Only a few of the probably 100 that we caught were any bigger.  Most were smaller... some only 4".﻿ 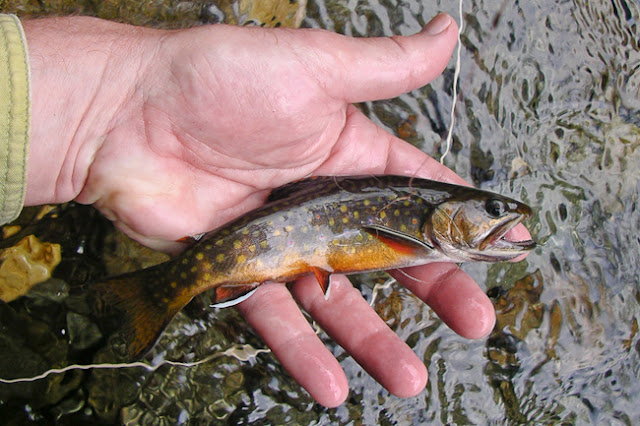 ﻿
The dry fly of choice for me is a herl body pink-post parachute.  Most often I tie it with a tail of hackle fibers but it works just as well without at tail.  The pink is for me, not the fish.  Size 12 is used wherever it works.  I've never gone smaller than 16.  These fish are opportunistic hunters most of the time. 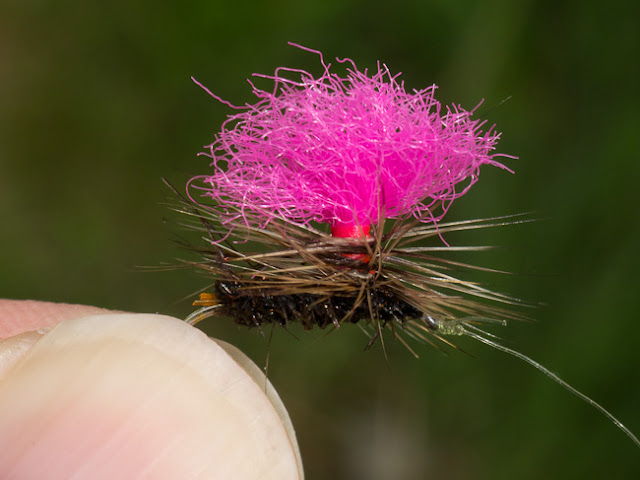 Paul is a big Elk Hair Caddis fan.  But to add some visibility he concocted a bunch of these pink post low riding caddis, first used by him on this trip.  They worked nicely.﻿  We both use a lot of peacock herl in our flies.  This caddis was tied with a herl body.
﻿ 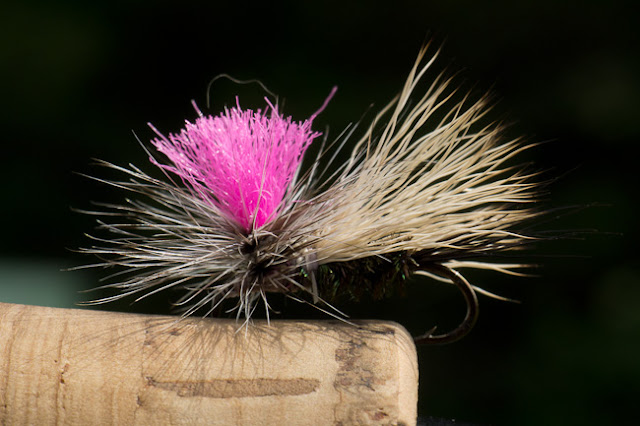 This was our dinner spot, eating sandwiches and snacks at one of the picnic tables.  It is across from Bretton Woods ski area, and is where we first saw the bear.  To be honest I felt a bit more comfortable seeing the bear here than an hour later when he crossed the river downstream from where we were fishing. 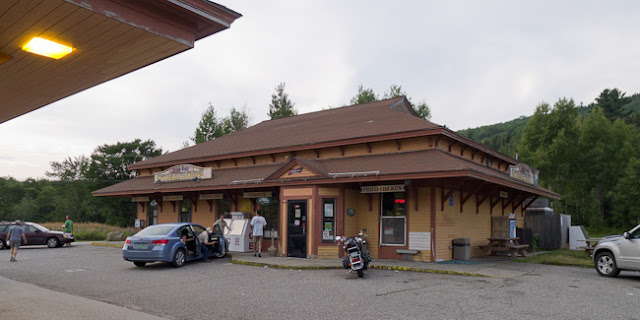 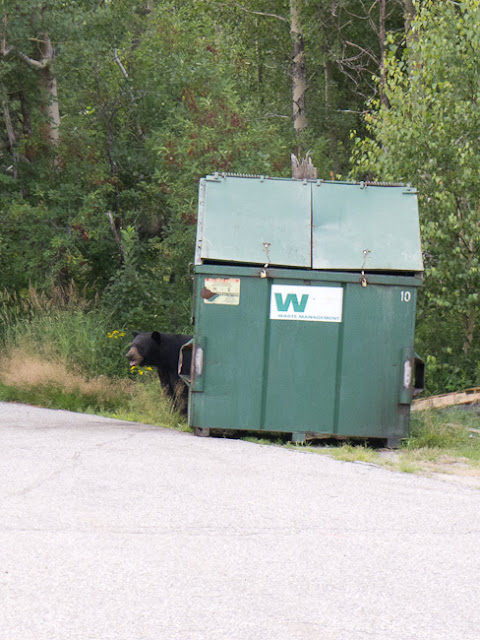 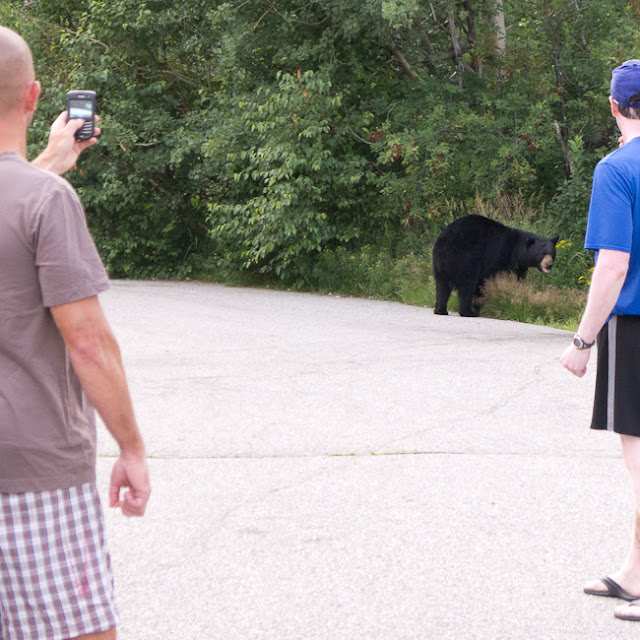