Getting back to fly tying (after two years). Step 2: Sitting down at the tying table and hoping it all comes back to me 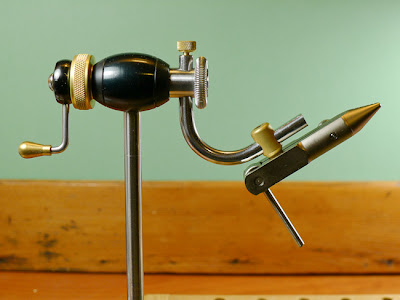 After setting up the tools and materials to tie for the first time in two years (see previous post), it is now time to get re-acquainted with the tools and techniques of the trade.

I have several nice vises and the JVice is perhaps my favorite. Designed and built by Jay Smit in South Africa I acquired mine in 2004 and wrote a review of it on my Website. My vise is #43 and was the second one sent to America... pretty cool.

Jay is always tinkering and has come up with many unique accessories. Check out his Web site. In particular he had developed a new jaw design and gooseneck arm which he sent to me perhaps two years ago. I did the retrofit per his instructions, and found the time to tie a bit with the new jaws before my hiatus from the tying table began.

Admiring the jaws today, they look like they'll be able to handle all the freshwater hooks I'm likely to tie with. As I recall, I liked the gooseneck arm because it made it easy to get my left hand behind the hook to hold materials. This is a rotary vise which I much prefer over standard designs.

After setting the vise on the table, I grabbed a couple of pairs of scissors from my tool box. One has straight tips and the other has curved tips. I have no recollection as to which I prefer or when I use one over the other. I will figure that out as I go along. These are Tiemco brand scissors, and therefore of reasonable quality. 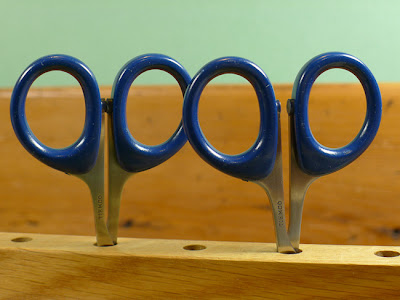 My threads are pretty straight forward. Basically two dimensions of Danville: 6/0 and 3/0. I have flat-waxed too. I don't recall if 3/0 is something different from flat-waxed. My tying brain cells feel like they have a sock over them. I hope this all comes back to me. 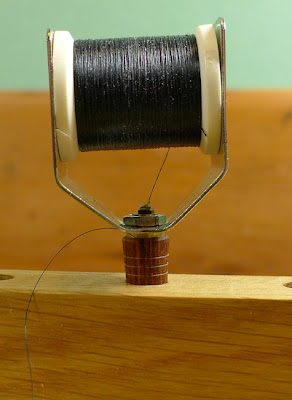 I believe the black Danville thread I've got in the bobbin is 6/0. I can't remember what the bobbin brand is. I'm surprised that I don't remember, because I went out of my way to buy a couple of them. They are considered a classic, old design. But I think they were cheap. I think the brand disappeared for a while and then was re-introduced in recent years perhaps under a new manufacturer or distributor. The spool doesn't move too smoothly through this bobbin as I remember, and I used to break the thread often. If I start breaking thread again, I'll switch to one of the other bobbins in my kit with "ears". Can someone help me with the name of this brand of bobbin?

I did see in my tool box a bag of blue dental floss threaders. They work very nicely for threading bobbins, though I also remember sucking the end of the tube trying to get the thread through.

I grabbed my little whip finishing tool. I have a longer reaching one, too. They are very nice tools. I think they are something like Martinetti, or some other Italian name that starts with an "M". I never learned to whip finish with my fingers. Probably because it is so much fun to use the tool. I can't recall, however, how to use it. I am hoping that it comes back to me, and it probably will... unless I start thinking too hard about it. I have several brass half-hitch tools. I think I used them more for hackled flies and parachutes. Maybe the half-hitch tool will be better for the Henry's Lake Special. We'll soon see.
﻿ 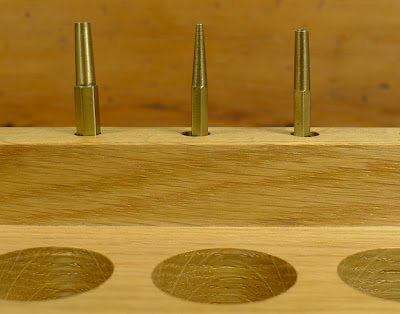 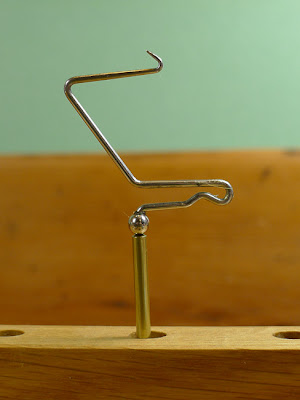 It was easy to find my hooks. They are kept in the original boxes inside bank check boxes. I have an entire box labeled R72. These are 2x wet fly hooks made by Mustad. I was pleased the see that this exact model is actually one of the listed hooks for the Henry's Lake Special as described in Terry Hellikson's Fish Flies. 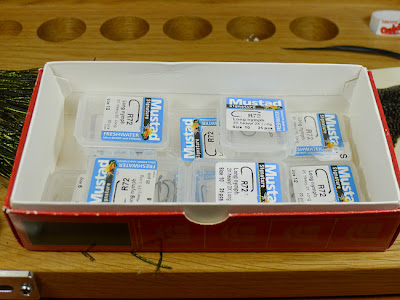 Lead wire. That's another easy one. My lead wire spools are also in a bank check box, and I have a complete collection, starting at .10" and ending with .35". I almost always use 10 wraps of lead of a diameter to match the hook wire diameter. 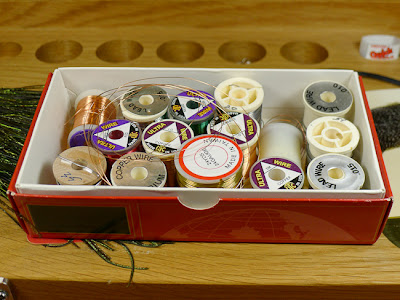 I often finish my flies with a little nail polish on the head. It looks like I should buy some new bottles, or at least thin them out with _____ (heck, I don't recall what you thin nail polish with, but its the same stuff they make nail polish remover with, perhaps starting with the letter "a" or "e" ??) 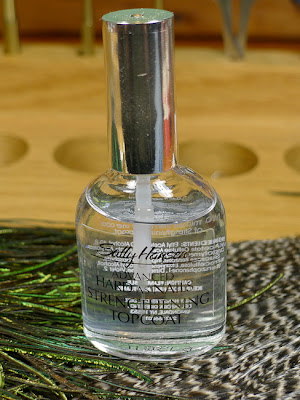 The last tool I can think of is a set of magnifiers. I think mine are called Mag-eyes. 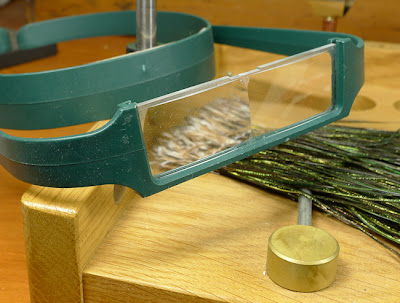