Don't lose your trip photos! Back up your computer! 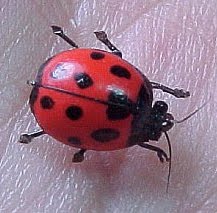 I just received an email from my friend and fly-tyer-extraordinaire Bob Mead.  You may know Bob for his natural looking flies, such as the praying mantis and lady bug.  (Here's my picture of the ladybug fly he gave me in 2005.  Believe me, there's a hook under there.)

Check out the Web site he has with Dave Martin at: Bob and Dave's Auctions.  At this moment over 100 items related to fly fishing are being auctioned.

Anyway, I was just checking in with him because the January Fly Fishing Show in Marlboro, MA is coming up soon. Bob confirmed that he will be there and I look forward to saying "hi".

As we exchanged emails, Bob informed me that before Thanksgiving his 2-year old Apple died and he lost all his pictures, emails, addresses, documents and articles.... in other words, everything!

Losing photos would be unbearable to me and I know others would be lost without all the tunes they've downloaded to their computers.  The moral of the story:  backup your computer.

There are many strategies and techniques for this.  I use two of them!  That's right, I back up two different ways:

1)  I have a 1-terabyte harddrive that sits next to my computer and is connected with a USB cable. Mine requires electricity, so it is plugged into my powerstrip, but there are other models that are portable which get their juice directly from the computer through the USB cable.  I believe 1-terabyte is 1,000 gigabytes, so it provides a lot of backupability.  Mine is made by Seagate. With the included software you can schedule backups to occur automatically, such as every night.  I back up "incrementally" which takes less time as it backs up only the information that has changed or has been added to my computer's internal drive since the prior backup.  I paid about $100 for this external drive.

2) If someone were to steal all my stuff or the house were to burn down, I would be out of luck with #1 above.  So I also backup online, to http://www.mozy.com/.  The cost is about $50 per year for unlimited backup.  One warning:  you really need a fast internet service (i.e. no dialup) to make this work.  You can schedule Mozy to work in the background while your computer is on, though this does slow down the computer somewhat (at least it does on mine.)  Or, you can manually activate the backup, such as while you are eating dinner or while you're watching a football game... or tying flies!  I do this perhaps once a week.

Recommendation:  If I could do only one thing it would be Mozy.  A similar vendor is Carbonite, which my wife uses.  There's no extra hardware to find room for at your computer station and it provides great peace of mind.  From what I understand Mozy backs up your files simultaneously on servers in several cities across the country as additional disaster protection.

I've used Mozy for quite a while and it works well for me - on both Mac and PC. Mozy's 2nd level support is good if you ever need it.

Use the following link to get 512 Mb more space on a free MozyHome 2 Gb account:

Anonymous, Good to know about the free account. Guess they figure once you use their free backup you will continue as a fee-paying customer once your need gets over 2Gb. If it weren't for all my photos, 2GB might suffice! Thanks for posting.

Mozy is awesome. I recommend it to all my clients. It is even better when you can save 15% the cost. It has saved me a couple times from hard drive crashes. Always good to still have a local backup, since recovery can be much faster, but that extra level of protection of Mozy offsite backup is great.